Kairosoft’s most recent RPG, Kingdom Adventurers, is a basic yet enjoyable smartphone game. The game challenges you to expand the kingdom by constructing and renovating various facilities, such as research centers, storage, and shelters. This is not the only thing you can accomplish; creatures may occasionally assault your town, and you will have to protect it. You may combat monsters, their bosses, and cultivate resources or material goods such as sturdy boards, food, herbs, veggies, brick, and so on with the support of allies or leaders. So, without further ado, let’s get to the meat of the matter.  Kingdom Adventurers guide and Kingdom Adventurers tips, tricks & strategies for beginners. 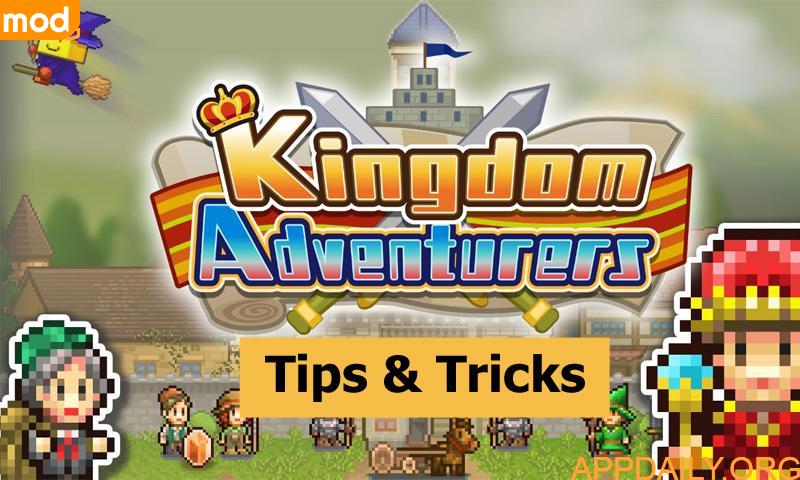 If you are new to the game, you may have many questions, such as how to proceed in the game, how to obtain allies, characters, or leaders, material things for town renovations, structures, and so on. This section addressed all of these concerns. So let’s get this party started!

Wood, copper coins/silver coins, red stones/rubies, food, and grass are the five fundamental in-game goods. These resources are necessary to construct the facilities or to conduct research. You can see the current number of resources and the maximum value in the upper-right corner of the screen (storage).Aside from these, there are several other objects to find as you continue through the game.

These resources can be harvested with the assistance of allies, leaders, or characters. First, you must place the character in a specified location. Tap the blue color deploy button on the right side of the screen, then choose a character – and then select a spot where you want to deploy.

The act of deploying.

You can use the characters outside of the kingdom’s borders. They will instantly begin acquiring resources. For example, if you wish to cut down a tree, place that figure near it. Characters assess their environment and obtain resources automatically – they mow the grass, dig the earth for copper pennies, and so on. items, gather food, wood, etc.

How do you enlist or acquire the Kingdom Adventurers characters? If you are new to the game, you will need to wait until the ship or town trading center feature is unlocked. Upgrade the town to gain access to additional features. You obtain free characters in the tutorial before this feature, and as you remove the fog, you may uncover a new character. 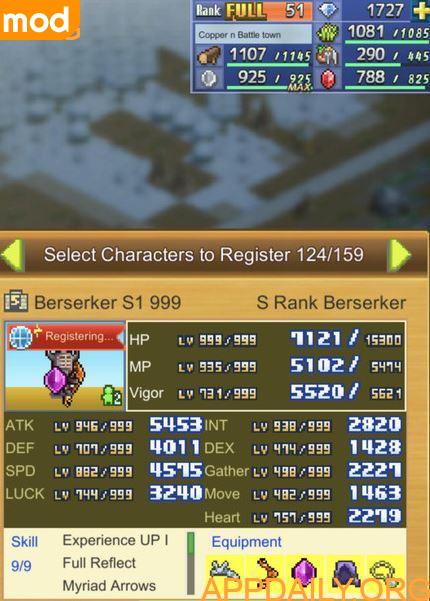 A substantial portion of the map outside of the Kingdom’s boundaries is obscured by fog. You may clear the fog and claim the region by beating the boss with the help of characters. To clear the fog, follow the instructions below.

Also, if you stick with the plot, you can meet a new ally, character, or leader. There is an NPC near the town that will help you throughout the game. Tap him to learn about new topics such as research, buildings, and characters.

You can recruit the characters if you’ve unlocked the trading center or ship feature. For the first time, the game provides you with free tickets in order for you to obtain more characters. Tap the Intro button in the bottom-left corner to recruit characters with various jobs/professions such as merchants, researchers, and so on from grade A-C rank. It will be either diamonds or tickets.

When you’ve found the right character, it’s time to hire him or her. In the Kingdom, you can have a limited amount of allies. You will also need to rank up the town in order to boost the maximum number. Select an ally depending on his/her skills/jobs by tapping the recruitment(+button) option presented on the town building. 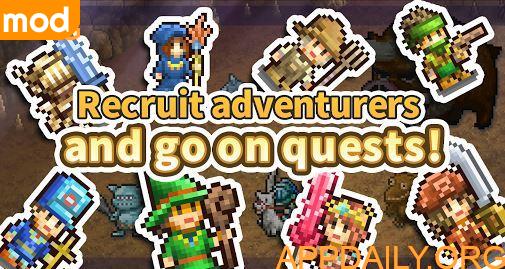 All of the characters have distinct abilities. For example, researchers can do research, agriculturists can assist you in growing better crops, while attackers are skilled in dealing with monsters. Tap the list option in the upper-left corner -> inhabitants -> choose a resident/character/leader -> there you may examine his lifetime, stats details, skill details, and so on. Tap the train option in the same menu, then drag the things from your inventory over the hero to give him/her EXP. Go to the equipment tab and press the Auto button in the bottom-left corner to equip him/her with gears such as helmet, shield, armor, accessory, weapon, and so on.

You can get the details of each building at Kindom Adventurers Wiki Page.

Monsters, fog, and the boss are all present.

In the moonlight, monsters appear. Your characters will attack the creatures automatically. All you have to do is position them near the monster. Kill creatures to get experience and stock/items.

Fog – Position the characters near the fog area. The fog will dissipate as they spend more time there. You will now be able to collect additional resources on the map.

Boss – Interact with the boss as you dispel the fog. The fog conceals monsters and bosses. And, in order to take their area, you must battle and beat them. When you find a boss, you head there (boss location) and begin the fight.

To advance in rank, you must accumulate a sufficient number of rank points. Examine the rank points bar in the upper-right area of the screen. When it is full, you will be able to improve the town’s rating. As the town’s level rises, you may recruit additional pals – and the game rewards you with free diamonds.

Material things such as robust board, high-grade brick, nails, and so forth are required to rank-up. You can obtain these goods by fighting creatures, defeating the cave’s monsters, or sending your characters to harvest resources in the region. They may obtain these resources by excavating the earth, mining ores, or cutting down trees. It takes some time. So be patient.

You may use the copper coins for these products if you have created the material shop.

There would be countless treasure chests outside the Kingdom’s borders. You may receive significant gifts from these treasure chests, such as resources, material goods, and equipment. So unlock these chests as soon as possible – all you have to do is deploy a character over the treasure chest spot. He/she will automatically hunt the chest, after which you can claim the goodies.

Train the characters to improve their stats, and let them combat enemies to gain EXP and level up. Equip them with equipment to make them stronger.

#3. Pay Close Attention To The Health Of The Characters.

Keep a watch on the allies or leaders, as their HP stats decrease as they continue to combat the horde of enemies. And if they lose everything, they may perish (Depending on the lifespan). Losing a character would be a major loss for the Kingdom, so you best look after all the allies you’ve dispatched outside the kingdom’s borders.

Tap the list option in the upper-left corner -> resident -> a list of residents will be displayed -> there you may check the character’s HP stats. Withdraw the character who is low in health. They will sleep in the room or structure you have made for them.

Temporary Shelter – On the right side of the screen, tap the construct option -> amenity tab -> temporary shelter. Double-tap a structure in the kingdom that you wish to construct.

Diamonds may be used to recruit additional characters depending on their jobs/professions, weaponry, facilities, objects, and so on.

Earn diamonds by watching the video ad – on the left side of the screen, a video ad offer displays (sometimes).

Scroll to the bottom of the diamond shop to see free offers; share a screenshot to earn diamonds; and complete Tapjoy offers to get diamonds.

#5: Use Your Characters Wisely.

You must deploy the character based on the resources required to proceed in the game. For example, if you desire grass, deploy a character in an area where grass is accessible. Place wood and wood-like things near trees. Allow them to dig the earth for copper coins or other stuff.

#6. Do More Research to Get More Advantages.

Tap the research option on the right side of the screen (if it isn’t present, you may have to continue with the NPC’s plot or rank-up the town building). You’ll also need an outside research building lab to conduct your study. Select the leader (researcher) from the research menu and spend the research resources. For example, after doing plantation research at the research lab, you may construct the plantation building.